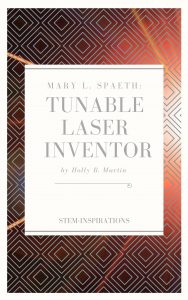 One of the most accomplished engineers I have had the privilege of interviewing was Mary L. Spaeth, a specialist in the field of laser optics.

Spaeth was a pioneer who discovered the world’s first “tunable” laser.

While researching ruby lasers at Hughes Aircraft Corp., Spaeth “came to believe that dyes would make excellent lasers.” Dyes are strongly colored chemicals that can be used to add color to a material, such as hair or cloth.

The year was 1966, only six years after the first laser was invented.

(Click here to continue reading on my blog at STEM-Inspirations.com)