In honor of Women’s History Month, this is the third in a series of posts on some of the accomplished women scientists and engineers I have had the privilege of interacting with throughout my career. Back in 1986, I interviewed almost a dozen women working in fields related to lasers for an article in Lasers & Applications magazine.

Today I focus on another of these women, Suzanne R. Nagel, an engineer at AT&T Bell Laboratories in the area of fiber optics.

Without her, you wouldn’t be reading this online. No, she didn’t invent the internet. But she helped make it possible to create the first transoceanic fiber optic cable, leading to today’s high-speed data transmission that makes our world-wide internet service possible.

The daughter of a Bell Labs scientist, Nagel earned a B.S. in ceramic engineering from Rutgers, then a Master’s and PhD in the same field from the Univ. of Illinois’ College of Engineering in 1972.

The basic concept of using a glass fiber to transmit ultra-fast pulses of light for communication had only been proven possible six years earlier, but the idea caught on quickly. The forward-thinking Bell Laboratories hired Nagel right out of college.

Her specialty was glass research. Most optical fibers are made of silica glass “doped” with small amounts of other elements, like germanium, to slightly change the angle at which it reflects light.

One method of making a fiber begins with a hollow glass rod about a foot long and as thick as a broomstick. The researcher fills the hollow rod with a vapor containing a specific mixture of chemicals, including germanium and silicon. After these molecules settle out along the inner surface of the rod the researcher applies a high heat to the outside of the rod, causing the chemicals to melt in a uniform layer.

Many such layers can be created in succession, with varying chemistries, to make a perfectly designed cross-sectional index of refraction. The right layers allow the fiber to “capture” pulses of laser light and move them through the core, without letting them escaping out the sides.

This fiber-making method, called Modified Chemical Vapor Deposition (MCVD), is where Nagel contributed her knowhow. Impurities such as water molecules cause the light pulses moving through the fiber eventually to lose their strength.

Nagel and her team were in charge of finding out how to keep water out of the fiber, and by 1986, they had gotten levels of water molecules down to only one in a billion.

“I reached the lowest levels in MCVD, to the point that you know you could basically eliminate the [water] by controlling the chemistry during processing,” she said.

Once the MCVD process is finished, the researchers heat the hollow rod so hot that it collapses into a solid called a “preform.” This preform is then hung by one end at the top of a high draw tower and heated very hot. As the preform melts, a very thin strand of the glass is drawn off the bottom in a continuous thread that wraps around a spool. This glass thread, or fiber, is only about the thickness of a human hair, yet a single fiber can be drawn that is 50 miles long or longer.

Fiber optics can carry so much more data than copper wires that telecom giants like AT&T put the new technology to work as soon as possible. By 1988, Nagel’s research contributed to laying of the world’s first transoceanic fiber optic cable stretching from New Jersey to  England and France.

This cable, called TAT-8 (stands for Trans-Atlantic Telecommunications) carried 565 megabits per second (Mbit/s) of data, the equivalent of 40,000 phone calls. It was a dramatic leap forward in technology: the previous, coaxial copper-based TAT-7 cable could handle only 4,000 calls.

“The [TAT-8] system represents the first link in the Worldwide Intelligent Network that will connect the telecommunications networks of Europe and North America with the Far East,” Nagel wrote in a 1989 article for Optics & Photonics News.

Successive cables followed TAT-8 rapidly, each one doubling the capacity for phone calls and data. Many of these were decommissioned after the dot com bust, leaving only TAT-14 in operation today. At the same time, many privately owned undersea cables, such as the Hibernia cable, which is designed to carry terabits of data per second (Tbit/s), now criss-cross the globe.

My Daughter the Scientist

Not only did Nagel’s career in the 1970s, 80s and 90s come at an important time in the history of telecommunications, but she also experienced a critical transition in women’s history. As an early Baby Boomer, she grew up in a generation of women that wanted careers as much as a family.

But careers for women in science and engineering were slower to take off than careers in other fields.

“I believe that for women the atmosphere has very much changed, but not to the degree it needs to,” Nagel said back in 1986. “Unfortunately, science is still kind of ‘clubby,’ and women have not been members of the club. Therefore it takes a lot more diligence and persistence to gain acceptance by one’s peers.” 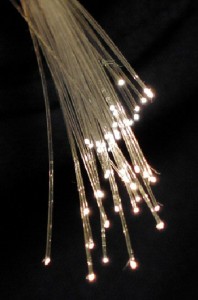 And Nagel definitely attained that acceptance. She was elected President of the IEEE Lasers & Electro-Optics Society, Chairman of the Glass division of the American Ceramics Society, and a Fellow of the Optical Society of America. By the time she retired, she had received two patents and was the first woman out of 80 at the time to be named an AT&T Bell Laboratories Fellow, the highest technical level of recognition in Bell Labs.

Nagel credited her career success to establishing a mentor system, and she set out to use her visibility to help create mentoring opportunities for other women in science, speaking to organizations across the country, serving as on the Board of Directors of the Women in Engineering Program Advocates Network (WEPAN) and moderating sessions at WEPAN’s yearly Women in Engineering conferences.

Nagel was also one of several scientists featured in a traveling exhibit called, “My Daughter the Scientist,” created by the Chicago Museum of Science and Industry to promote science careers for girls. And author Jeremy Bernstein covered her story in a chapter of his 1984 book, Three Degrees Above Zero: Bell Laboratories in the Information Age.

It’s been almost thirty years since my interview with Nagel, and yet some women scientists and engineers today may argue that the “old boys’ club” atmosphere still prevails in science and engineering. Back then, Nagel devised a simple, common-sense test to determine when all such gender boundaries have been erased:

“The way we will be able to judge that equality has been reached is when a spectrum of performance ranging from superior top-notch science to mediocre science is viewed as acceptable for women, just as it is for men,” she said.