In this fourth and final post celebrating Women’s History Month, I will highlight another AT&T scientist who I was privileged to cover early in my career as a writer. Though I worked in Media Relations at AT&T Bell Laboratories from 1987 to 1990, I did not meet Leslie Guth until after I had left the Labs to begin freelancing.

Then, in 1991, I interviewed her for an article in Woman Engineer magazine. Guth had arrived at the Bell Labs Engineering Research Center in 1984, fresh from earning her Ph.D. in Materials Science and Engineering at the University of Pennsylvania.

By the time of our interview seven years later, she had already earned the title of “Distinguished Member of Technical Staff” and become something of a media star in the field of environmental engineering, having been quoted in the Wall Street Journal, The Scientist, and several other publications.

It was a case of being the right person in the right place at the right time. Guth was hired into a group that was focusing on ways to minimize the use of chlorofluorocarbons (CFCs) in AT&T’s products. CFCs are man-made chemicals that are useful for refrigeration and aerosol sprays, and for cleaning electronic circuit boards.

In the 1980s, CFCs had been identified as the “chemical Public Enemy No. 1,” according to an article in The Scientist. That is because CFCs were found to react with ozone in the stratosphere, contributing to an “ozone hole” over the North and South Poles.

In the 1970s and 80s, scientists began to worry that this thinning ozone layer would allow more and more damaging ultraviolet radiation to enter the atmosphere.

But CFCs are extremely useful chemicals, including in the electronics industry. At that time, they were used as solvents to clean off flux after soldering the components to the circuit board. Flux is a pasty material that prepares the metal surfaces to bond, and at the same time prevents them from oxidizing as high heat is applied during soldering.

By looking at different ways to solve the CFC problem, Guth and her team decided to develop a new piece of equipment, called a “fluxer,” that totally controlled the amount of flux so the cleanup step could be eliminated.

The new ultrasonic fluxer earned her team two patents, and was put to work in virtually all AT&T factories worldwide, including in Scotland, Singapore and Mexico, Guth told me in a recent email.

Eventually, AT&T ended up selling the fluxer commercially, even to competitors, and the company licensed the technology as well. Guth believes the fluxer may still be in use, although not widespread, since it is used to put together older circuit packs, not today’s miniaturized components.

Because of her experience with the fluxer, Guth was chosen as AT&T’s representative on a working group put together by the U.S. Environmental Protection Agency (EPA) to come up with alternatives for CFCs.

Serving at the UN

Connections from the working group led to Guth’s selection as one of only 12 people from around the world—and the only woman—to serve on a United Nations Environmental Program (UNEP) committee to review solvent alternatives to CFCs.

In 1987, 20 nations had already signed the Montreal Protocol, which originally called for a 50 percent reduction in the use of CFCs and other ozone-depleting chemicals by 1999. Partly as a result of the UNEP committee’s report, the Protocol was amended in 1990 to agree that Western nations would completely eliminate CFCs by the year 2000. As of 2012, all the nations have agreed to completely phase them out. 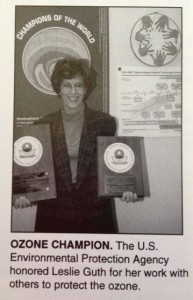 “Looking back, it is amazing how nations came together by signing the United Nations Montreal Protocol of 1987, and even more so, after the signing, governments and industries joined together globally with proposed solutions and real implementations,” Guth told me.  “Over 25 years later, we have seen real impact of our work and being part of those efforts has been gratifying. “

During a long and distinguished career, Guth navigated the changing face of AT&T as Bell Labs became part of Alcatel-Lucent, rising to the level of Senior Director and being named a Fellow of Bell Labs. She is now an independent business coach and consultant, and is working with the IEEE Computer Society to develop a body of knowledge on enterprise information technology.

Like so many other women engineers, Guth has provided mentoring to young women coming into the field. A year ago, she was the keynote speaker at the 15th Annual Corporate Dinner of the University of Pennsylvania Society of Women Engineers, giving career advice to the students.

“Thirty years ago—and even ten years ago—I was often the only one, or one of just a few women involved in an organization,” Guth said.  “Now I see many more women particularly in the Information Sciences/Information Technology field, and that diversity is important and good.”